Passive infrared sensing devices have become ubiquitous in commercial real estate. The technology has become a standard in many applications due to its simple and completely anonymous method of detecting presence. Historically, building systems have utilized the integration of granular motion sensors and their basic occupancy event data for driving improvements in energy usage. Sensors are almost always a component of a wired ballast control for overhead lighting. Everyone knows the tech — you walk into a room and the lights turn on with your presence. In some scenarios, sensor data also control desk or task power — whereas energy draw from passive devices is cut to prevent extraneous use.

As the suite of workplace technology for meeting and collaborative spaces has expanded, sensor data has begun to inform and control other auxiliary systems and technology like teleconferencing devices and ventilation. Single infrared motion sensors provide key event data for controlling the use of these types of systems. Without this data, energy usage in buildings would be through the roof.

Today, the efficiency and performance of passive infrared sensors themselves have been improved dramatically. Companies like CoWorkr have built them into ultra-low-power and real-time responsive devices that last 5+ years on a coin cell battery. This type of innovation is driving new responsive work environments— making use of the data not only for building systems but for driving other experiences like room reservations, hot desking, or even janitorial services.

Infrared Sensors used in office environments are typically “passive” devices, meaning they only detect infrared radiation (heat) and do not emit it from something like an LED. A passive infrared sensor consists of:

Infrared Sensors are often paired with other technology to form a device, like CoWorkr’s WorkPoint Sensor. When a moving object that generates infrared radiation enters the sensing range, the difference in IR levels between the two pyroelectric elements is measured. The sensor then sends an electronic signal to the devices embedded computer. Based on the quality or strength of the signal, the computer may choose to send the event data or ignore the occurrence.

In most applications, using PIR-based devices like CoWorkr’s WorkPoint Sensor, the use case is to provide a binary measure of one location. This means the occupancy reading only provides a single “occupied” or “vacant” data point and does not provide a headcount of how many occupants are present. The simple occupancy data that is generated by PIR-based devices is typically used to determine if a space (of any size that fits the devices’ field-of-view) is either occupied or vacant. This data may be used in real-time to drive live applications or aggregated to determine trends of use.

If single PIR-based devices have a field-of-view (FOV) from which they detect infrared changes, what happens when you put sensors side-by-side and create multiple FOVs? Multi-zone sensing is the general intent of sensor arrays. An array of passive infrared sensors, or a product that splits a thermal-pile up into an 8×8 or 16×16 array, for example. A PIR array may comprise the following components:

An integrated sensor like an array PIR sensor provides the same binary data but for a grid of locations. This allows a computer to take the PIR data from each grid point and quantify more in-depth information. For example, algorithmically, one may deduce that an infrared-emitting object is moving from one grid to another—indicating a direction of travel. A second example of using this data would be to determine if an object (emitting a changing infrared signature) is located in a particular area of the space.

What does this data mean for monitoring workplace occupancy? PIR array may be used for providing an update on if/when there is occupancy and possibly information as to if the occupant is moving in a particular direction or located at a specific location of the floor. This data is, however, not quite detailed enough to give a headcount of occupants in a room since it’s possible for multiple people to occupy a single grid point depending on the position (or height) of the mounted sensor.

Detecting infrared radiation for the purpose of detecting occupants can be done in several ways and return a sliding scale of data resolution. While using PIR-based sensing configuration provides very granular insight on if motion has occurred— it doesn’t go far beyond the binary data of if and when it detects occupants and cannot differentiate between 1 or more occupants. Even an array of PIR sensors will only provide a single binary value for each grid which may be representative of any number of occupants. To get more object information out of a scene a more robust approach to thermal sensing must be explored.

A microbolometer detects heat similar to how a camera detects visible light. It lets the infrared energy —the Long Wavelength Infrared (LWIR) energy produced by a scene— of nearby objects absorb into its sensing area and translates its shape into digital data. The data can then be used to reveal the shapes of object shapes in pixels. A microbolometer-based sensor may include:

Pairing the thermal data with artificial intelligence provides companies like CoWorkr, with the ability to do fully anonymous “people-counting”. People counting differs from basic PIR occupancy detection in its ability to identify one or more individual people within a single scene based on their thermal profile. This is done by comparing the heat profile with a library of heat profiles that have been previously categorized as humans — a process called deep learning. By using the reference images as a tool for identifying humans, a computer can use the same predictive logic to identify humans in front of the sensor in real-time.

While microbolometer-based technology has historically been very expensive and power-hungry, new advancements in both sensing and processing have led to the release of bleeding-edge devices. Unlike any predecessor, CoWorkr’s WorkSpace Counter has packaged this microbolometer-based technology into an ultra-low-power device that can operate off of battery power. This device is, in fact, so efficient that it can last over 5 years while reporting real-time data. 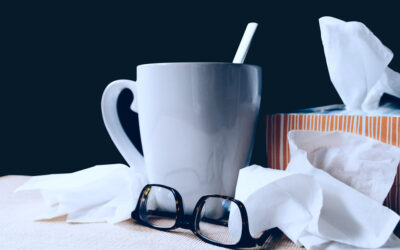 How to Mitigate Sick-Day Risk With Occupancy Data

A Hybrid Office for Everyone